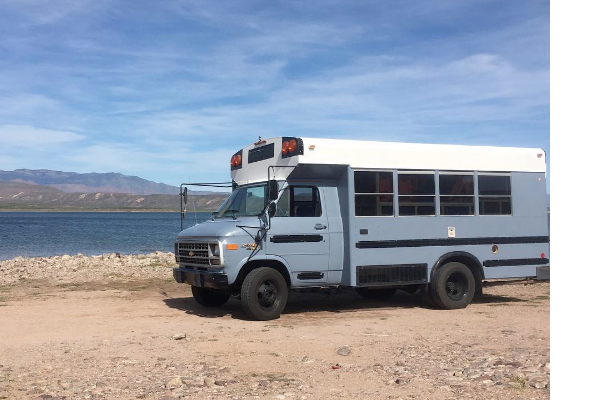 Couple living in Uganda convert a short school bus into a home and explore the US.

Karin was drinking cocktails and Mark was serving them up at his brother's bar in Uganda when they met. The two eventually began talking about traveling the US together and explored different means of transportation but it was Karin's deep fascination with American school buses and how cheap you can get one for that led them down the path of converting a short school bus into a tiny home.

While Karin worked on a film project in Uganda to raise funds for their upcoming adventure, Mark secured a bus in Arizona and became best friends with an angle grinder. Upon finishing the bus conversion they hit the road with their 6.5l diesel motor purring. I was lucky enough to cross paths with both of them and got a full tour of their bus. I sat them down for an interview of which you can watch in the video below. It's a good one and I love seeing more and more couples traveling and living together in unconventional ways.

Bus Specs:
-Make: Collins bus on a Chevy chassis
-Model: Chevy P30 Collins bus with a right rear wheelchair door
-Motor: 6.5 Diesel
-Year: 1995
-Interior Square Footage: 80-90 square feet
-Current Location: Chandler, Arizona
-Purchased From/Location: Phoenix - Canyon State Bus Sales
-Cost in materials for the conversion: 3k +/- including tools
-Is the conversion complete or still in progress? Collins probably won’t change much apart from minimal aesthetics. He’s somehow managed to worm his way into us so deeply that to rip anything out and recreate would seem sacrilege. Maybe solar panels and a roof rack. And in my lofty wrenching dreams a four by four conversion… 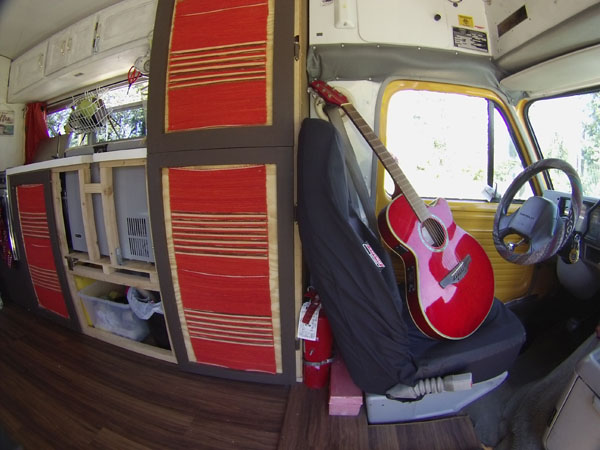 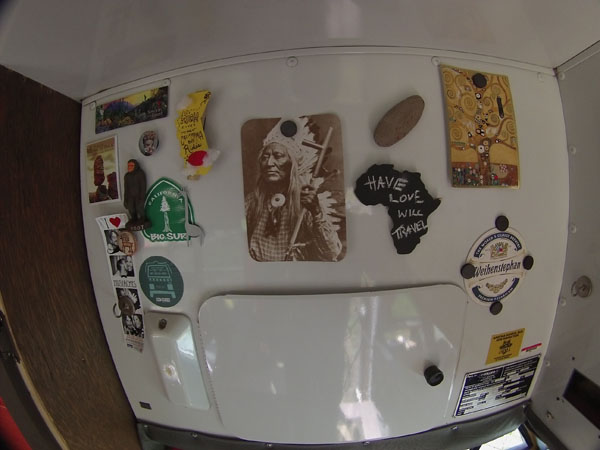 -Does your bus have a name? His name is Collins, cause it’s written all over him. I’ve always believed cars/trucks/boats/planes should be female but Collins is Collins and he’s a dude. He’s gender fluid.
Tell us a bit about how the idea to build a bus into a home on wheels came about. Karin and I had lived in Uganda for almost four years and were ready for a different pace - a different way of living in the world. I’ve always held the belief that there’s no better place than the western states so I wanted to show her (she’d never visited) and get more of it myself. We explored driving a car with a tent, renting an rv, buying an old rv and fixing it… We explored all options. It sort of came down to Karin’s semi-obsession with American yellow school buses. She’s grown up in west Africa and Germany and had never had the experience of a school bus apart from seeing them on television. Kind of seemed perfect when we realized we could buy a school bus really cheaply and make it into a comfortable home on wheels for less money than most of the other options. 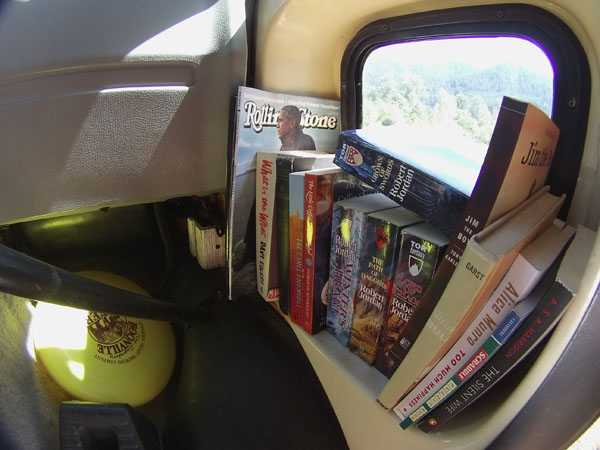 Who is involved or part of the crew with your bus? Primarily it’s me and Karin. She flew back to Uganda to do some film jobs to make the money for me to work on Collins for three months and to finance the following three months of our travels. Secondarily, my folks let me park him in the ubiquitous “side of house rv space” that all houses in Phoenix seem to have. They also let me drink their coffee and eat their food while I built him out. Thirdly, the next door neighbors were pretty cool with me using the angle grinder while their toddler took his afternoon naps. 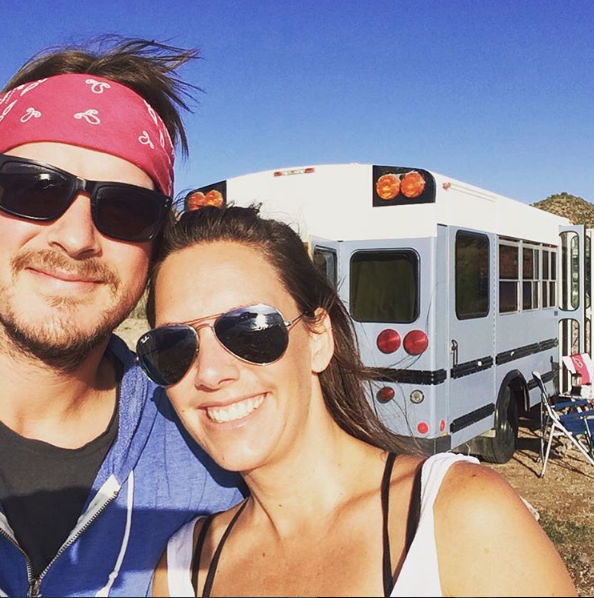 What materials did you use during your build? Any reclaimed/upcycled items? Used a lot of Home Depot lumber for framing things out, bed frame, table top, etc. Building on a budget is fun though! I scoured a Phoenix RV salvage and found some upper cabinets, heavy duty battery wires, and reading lights. A Habitat for Humanity store nearby had the perfect table mount. Karin brought some really beautiful pieces from Uganda to accent the cabinet doors and decorate the walls. Our privacy curtains at the front are Ugandan fabric sheets. 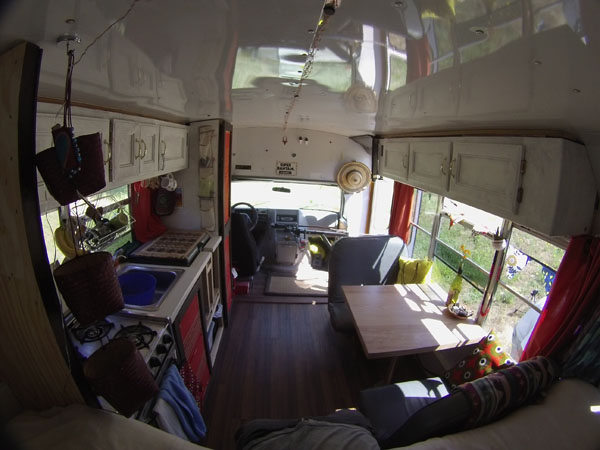 How many can the bus sleep and how is the sleeping arrangement designed? Collins could sleep three in a pinch. He’s designed for two in the full bed in the back but a couple mats on the floor are pretty comfortable for a third. 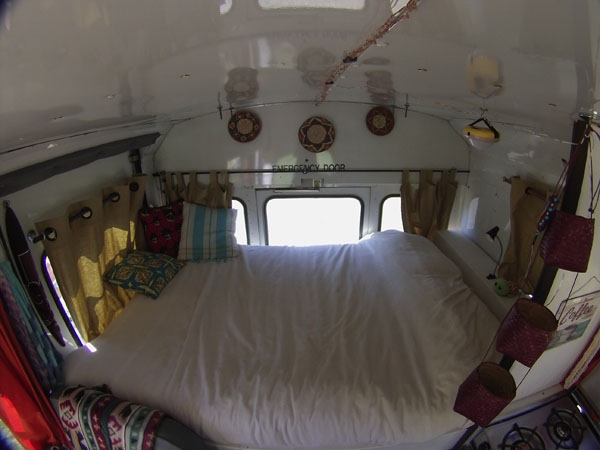 What is your kitchen and cooking setup? We’ve got a pretty capable kitchen. A four burner stove (from a mid seventies airstream sourced through craigslist)  with an oven connected through the wall outside via quick connect to a standard lp tank. Water is a five gallon tank under the sink through a cheap chinese 12v pump from Amazon. The top loading Whynter fridge doubles as counter space. Karin has made quiche, lasagna, brownies and the best carbonara you’ve ever tasted in Collins. I’ve fried some eggs. That’s about all I can do responsibly. 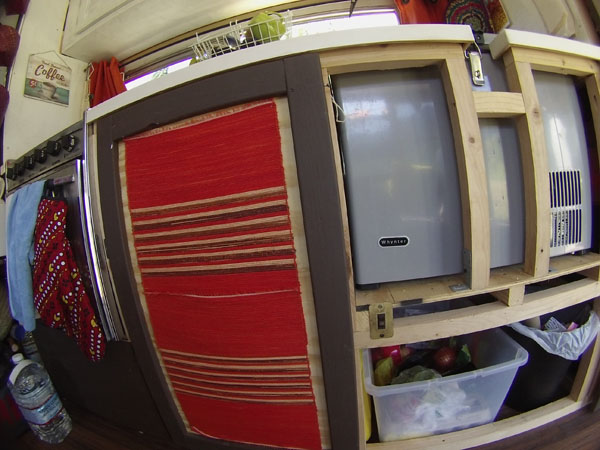 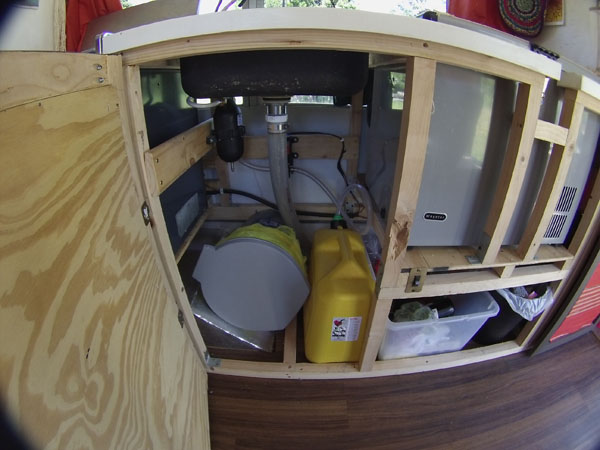 Simple sink setup with the 12v pump and 5 gallon jug of water. 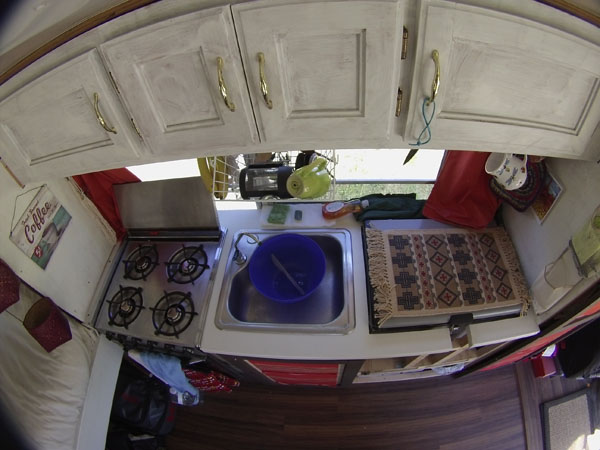 What is your power source? We’ve got a couple flooded deep cycle batteries in a box under Collins. They’re charged as we drive with a voltage sensitive relay from the engine battery. When we can plug in a three stage smart charger tops them off. As it is, we can have two or three days of silence and cold beer from the fridge before I freak out about not letting the batteries get below fifty percent. I’d love to get some panels on the roof and upgrade the amp hours but it hasn’t been necessary so far. 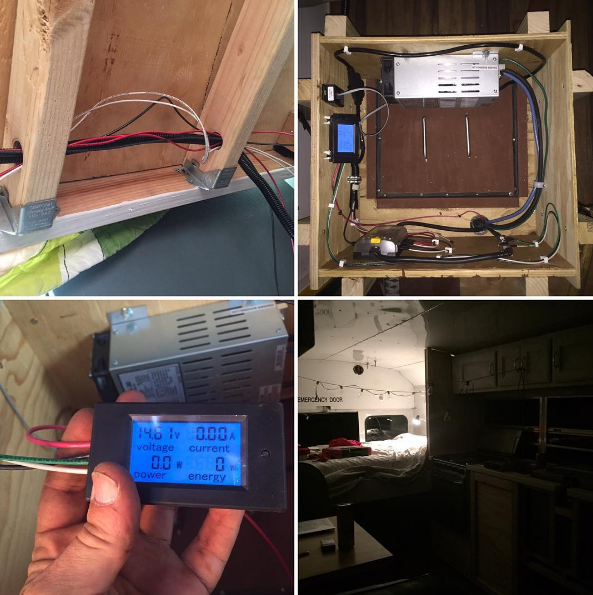 Do you have a heat source for colder weather? We cried for a wood stove in Capitol Reef National Park last April when we woke to snow on the windscreen. But no, we don’t have a separate house unit. Our heat source is the proximity of human bodies under a blanket.
How do you stay cool in the hot summer months? Drive faster and open the windows more? I took out the massive stock AC unit that came with the bus - it owned the whole head room above the bed. We didn’t have the budget to accommodate the power supply to run a full time house air conditioner. We got a pretty good 12v fan that works well in the dry western states. Things will have to change if we head to the humid midwest and south.
What are you doing for water source? Do you have a bathroom solution for the "rumble guts" hit? Water is in a tank under the sink. 5 gallons does us pretty well for a few days of cooking and washing hands and a bucket bath when we need it. When we street park we’ve got a bucket with a lid. A few scoops of kitty litter and tie it up tight.
What is the most unique feature of your conversion? Strangely, until we parked behind you and Valerie, we never once ran into another short school bus conversion. We expected to see at least a few along the route we took up the coast. So the most unique thing still is that it’s a school bus! And we love that. Another is that somehow we’ve managed to create a tiny home that feels like it has a lot of space. At the Joshua Tree Music Festival we had six or so people dancing in Collins. 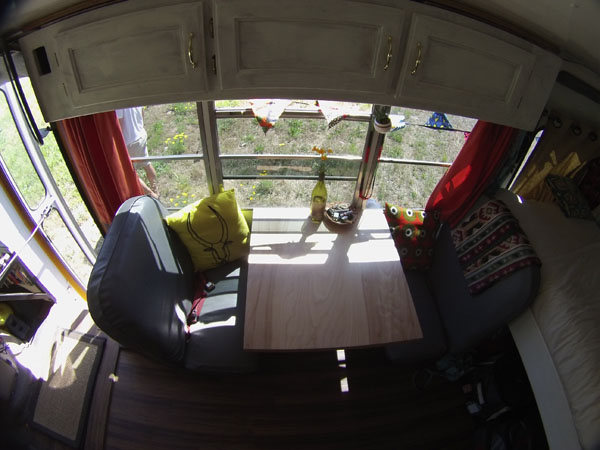 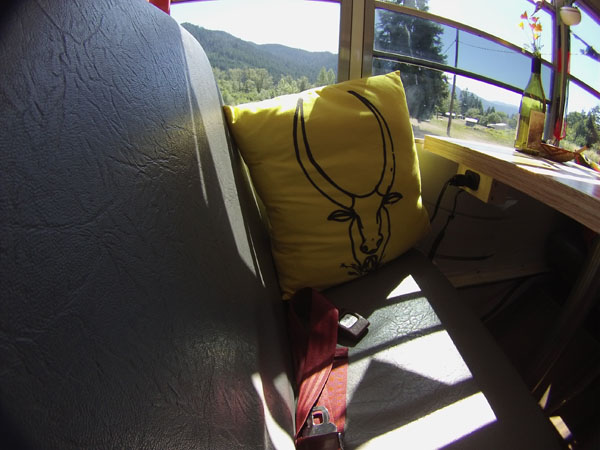 What do you do for income while living in the bus? Working on that one. Would love to figure out the solution. Any tips are welcome.
What do you do for Internet while on the road? We use my phone hotspot.
What’s the hardest thing about living bus life? Being together with one person for 24 hrs a day can be hard. It’s also the best thing about bus life. As you learn to adapt to being with someone you love around the clock you refine what makes you tick together. We’ve learned that what’s hardest about it is also what’s great. Sometimes it’s unnerving not knowing where we’re setting the parking brake tomorrow night but that uncertainty makes it more worthwhile. 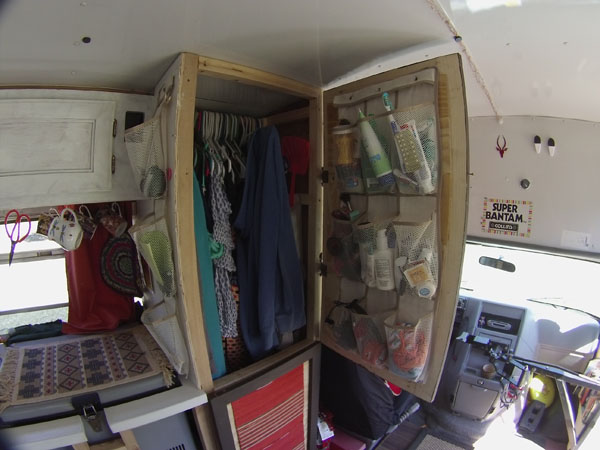 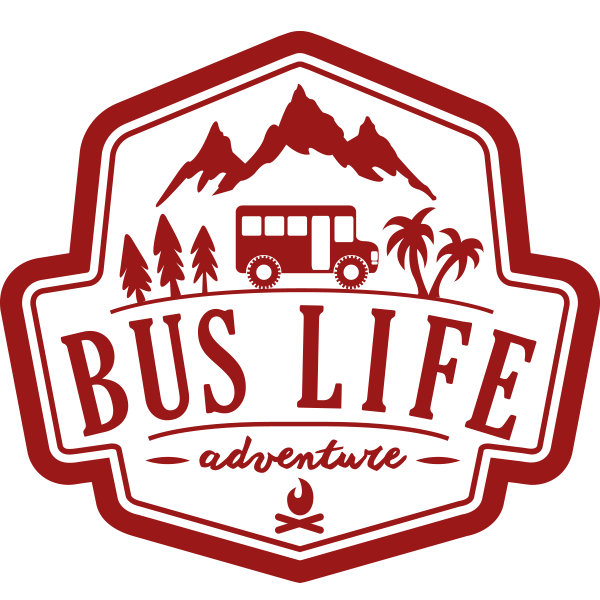