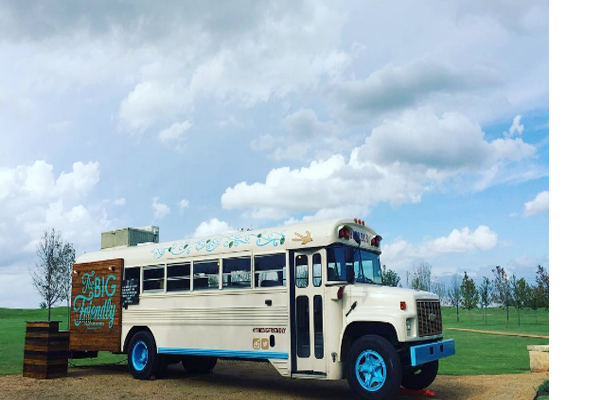 Craft beer on tap while you hang out inside a converted school bus.

When I first came across this bus conversion I was drawn in by the extensive woodwork and in particular the countertops. It was after I saw beer taps in the background that I realized that this was not your normal bus conversion and I sat scrolling through the Instagram feed. Shortly after Joe actually mentioned Bus Life Adventure in a comment and said we should come have a beer in the bus. If I was closer or had the time I would have driven there that night!

I realized Joe had taken the bus conversion mindset but used it for another means. Rather than creating a tiny home he decided to create a bar. A mobile bus bar serving high quality craft beer. Food trucks are hot right now so Joe decided to take it a step further and spread the beer gospel to locals in Oklahoma by means of bus.

This interview and writeup is nothing like I've done before so I tried to hit Joe with questions that were specific to his unique idea of taking a bus conversion and turning it into a mobile bar serving high quality craft beer. Enjoy.

-Cost in materials for the conversion:

-How did the idea to serve frosty beverages on a bus come into play?

I've been involved in the local brewing scene in OKC since 2010 when my brother moved here from San Diego. We started brewing together and soon were creating flavorful batches almost once a week. I began going into a local brewery, Coop Ale Works, and giving my time each week to clean tanks, wash kegs, clear out mash tuns, and occasionally watch the boil. In return I would often get ingredients to brew with. Eventually I was hired part time to work on the manual canning line, which made for some good times and great memories. Being exposed to the craft beer scene in this way allowed for opportunity to help build into the brewing community in unique ways.

The more my involvement with craft beer deepened, the more my love for it grew. I began to have a desire to develop my vocation around it. Blending my hobby, with business, and community sounded like a lovely idea. I really wanted to figure out how I could use business to spread the gospel of craft beer here in Oklahoma. With the local food truck scene growing, it seemed like having beer on wheels would be well received. This is where the idea for turning a school bus into a beer bus came to life. I dreamed of getting an old bus and building a tap room inside, where old and new friends could sit and enjoy meaningful conversation while drinking a tasty beverage. The feel would be warm and welcoming. The Big Friendly is Oklahoma City's nick name, and it was the perfect name for the bus. And so the journey began. 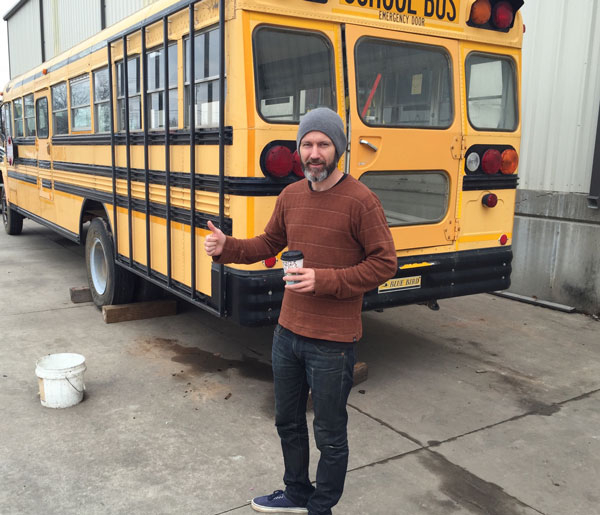 -I'm seeing a lot of beautiful wood work in your bus. Where did you get most of your material from?

The 2 booth tables and the bar that runs along the passenger side were crafted from re-purposed pallet wood. The top of the main bar in the back of the barrel tap room has rough cedar that was found in a buddy's garage. The face of this bar is made of old wooden doors that were found in an airplane hangar. There were four doors that we sanded down and cut to size to incorporate into the interior design in a few places around the tap room. The wood that makes the barrel ceiling and exterior signage is 1 x 4's purchased at our local lumber store. 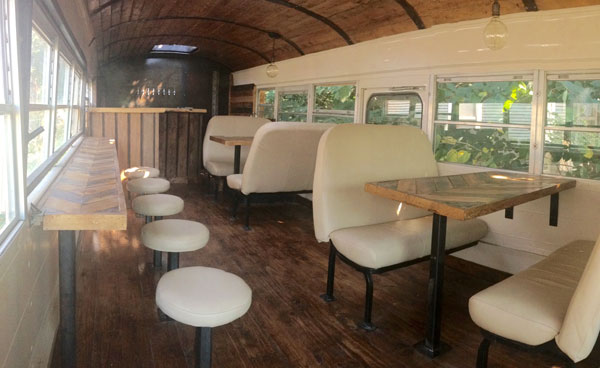 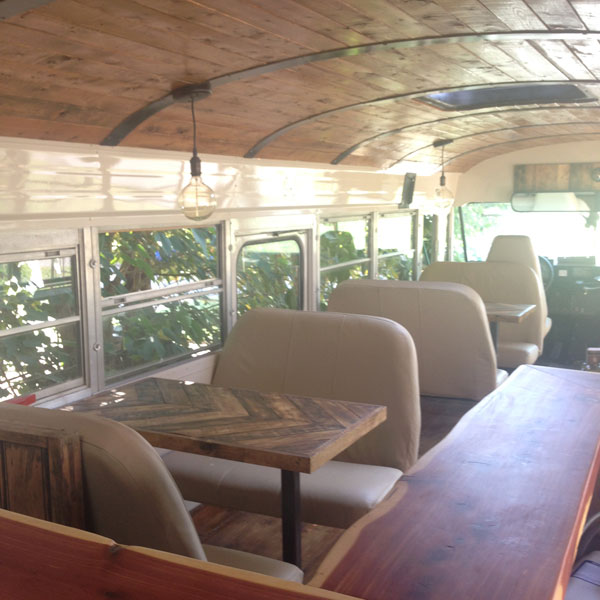 -How long did the conversion take you?

I bought the bus in October of 2014 and it sat through the winter while I planned out the design and color schemes. In March 2015 we started working on the base paint for the exterior and interior, as well as artistic paintings. The interior remodel began in June and was complete for our first event in October 2015.

-What was the hardest part of the conversion?

The custom walk in refrigerator was a beast to complete. We had to figure out how to design a fridge that would hold plenty of beer for the larger events we'd go to, and also would compliment the flow of the interior and exterior look of the bus. The goal was to have 8 taps on the inside that were synced to 8 taps on the outside. We had to create a large hole in the ceiling and mount a refrigeration system that wouldn't interfere with the integrity of the structure of the bus. It had to be large enough to keep beer cold in a bigger space 24/7. It was a chore for sure, but in the end it turned out to be one of my favorite features that goes mostly unnoticed.

Another difficult undertaking was removing 3 of the original bus windows on the passenger side, and welding them so they would open together. After consulting with a few friends, we really felt the original look of the bus needed to be kept in tact – so using the original windows was a must. I really wanted to have a large opening that connected those who were on the inside of the bus to whatever might be happening on the outside of it. We placed 5 bar stools along the inside of this window, and it really has become an integral piece in intimately integrating the barrel tap room with whatever event we happen to be at. 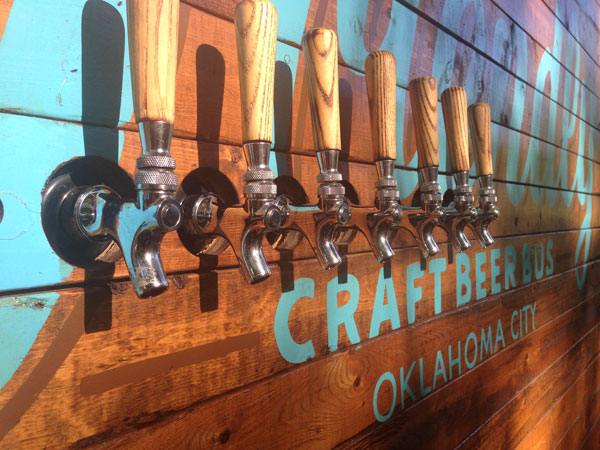 -How many thirsty patrons can you pack into the bus?

We have room to comfortably seat 14 people, although at times we've had a few more than that with standing room only. 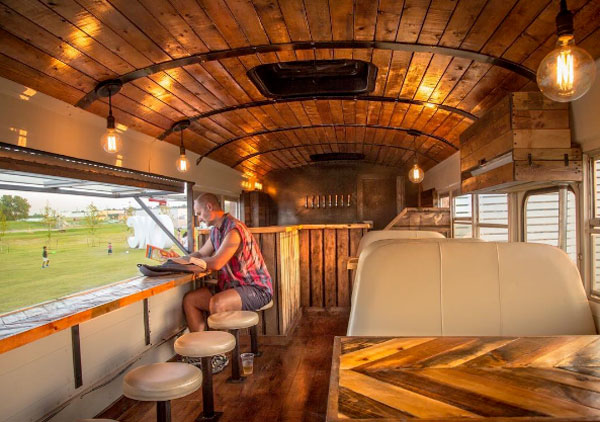 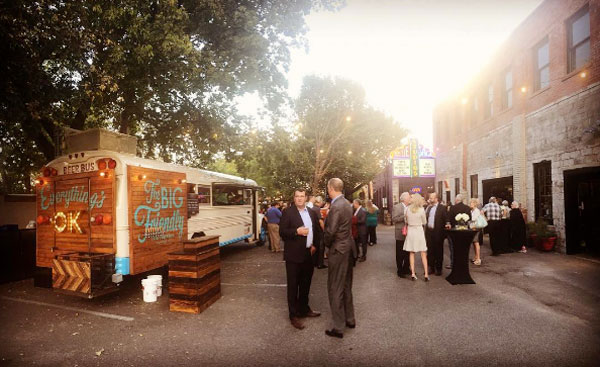 -How many taps do you have?

-What do you do for power?

When the bus is parked at home, we plug into the house. On the road, we use a EU6500 Honda generator but always have 100 feet of cord in case there's an available plug in.

-Besides the beer taps, what's the most unique thing about your bus?

The Barrel Ceiling: The ceiling is covered with wood, and at each of the ribs we put 3 inch wide pieces of steel that gives the feel that you're sitting in an old wooden beer barrel. It really compliments the space well.

“Everything's OK” Marquee Sign: On the back of the bus there is a sign that is composed of artistic paint, artistic steel, and lighting. This was somewhat difficult to engineer, but with the help of some pretty talented friends we made it work. The sign is a play on words – letting people know that Everything's OK, and that everything we sell is from OK.

Artistic Renderings: Art that blends Oklahoma and beer has been painted in a few locations by 2 local artists. More notably, on the hood of the bus is the Oklahoma state flag, with hops replacing the peace pipe, and barley replacing the olive branch. Along the side of the bus there is a Scissortail, the state bird of Oklahoma, where the bluebird once was. Behind it are hop cones blowing in the Oklahoma wind. 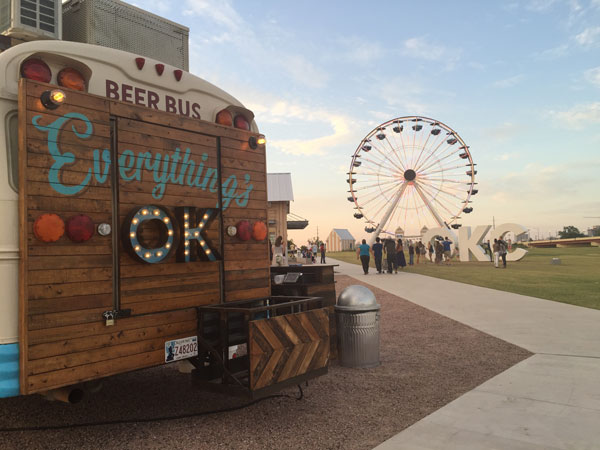 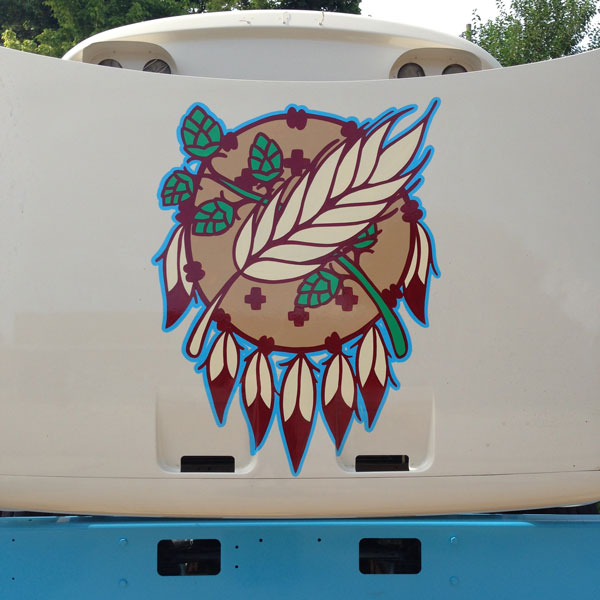 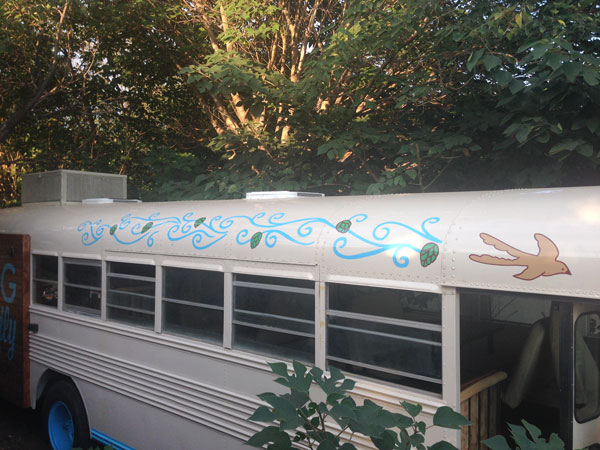 -How do people find out more about your beer bus? 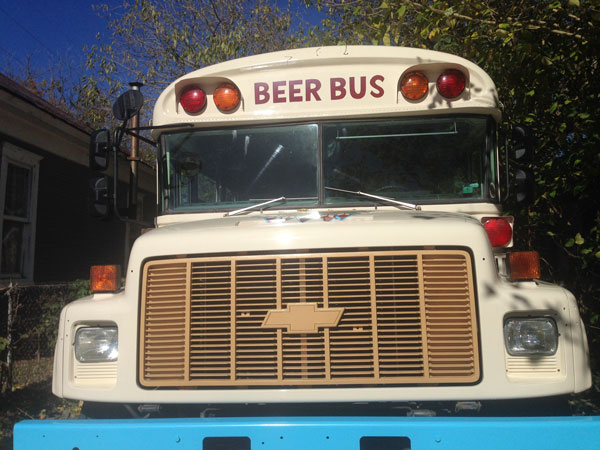 Found this blog helpful? Thank us and buy us a beer!