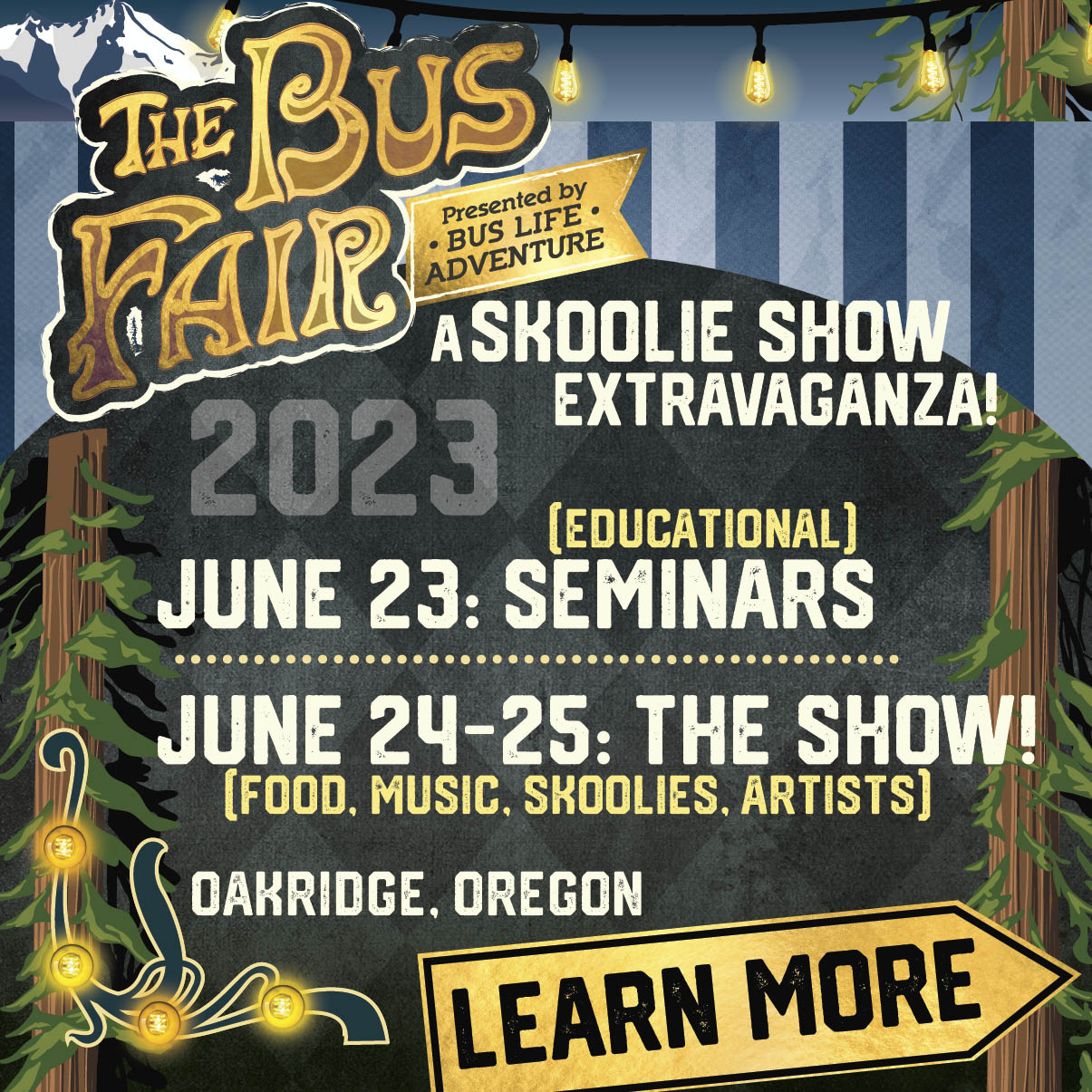 Breaking down on the road -

How to be Prepared

Breakdowns in the bus are something all bus owners will have to deal with at some point.

Some of us are less prepared and capable than others but even if you are a diesel mechanic, breakdowns, flat tires or some other kind of roadside trouble could still find you. From our bus breakdown track record, you would think we didn’t do anything to prepare for engine trouble, but we had the engine looked over before setting out, we had a diesel mechanic spend hours teaching my husband how to do regular maintenance, check fluid levels and what problems to look for on this type of engine.

We also had spare parts galore with us on board, as well as all kinds of fluids and tools. Obviously, you can’t be prepared for everything, but we at least comforted ourselves by the fact that we tried. We didn’t have any extra fuel lines with us, which was a mistake! 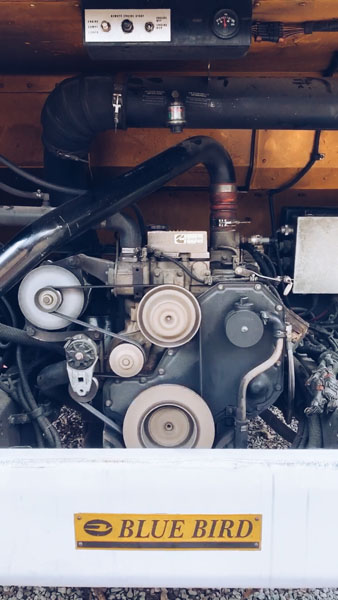 So we set out from North Carolina and not two hours after we left, fuel was spraying out of the back of the bus. I wish I could say that this was the last breakdown on our maiden voyage across America but we broke down again in Nevada with the same problem. After the first breakdown we had taken the bus to Cummins engine dealer in Nashville to have them rework the spaghetti of fuel lines. The only good news with the second breakdown is that it was still under warranty from Cummins. They had put one of the lines in backward, which put too much pressure on the rest of the lines, and then it finally busted outside of Las Vegas. We are still novices at bus living but our crash course in bus breakdowns has us a little wiser on road trouble.

Here are nine tips to help you prepare for bus breakdowns. 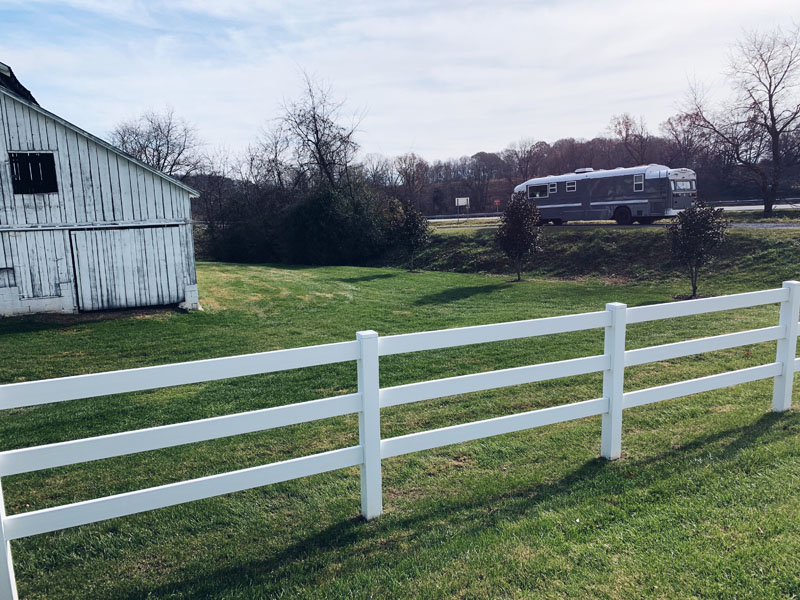 Always, whatever you do, have good food and even better drinks with you on the bus. On our first breakdown we had beers and brats. On the second breakdown we had Moscow mules and a charcuterie board with aged meats and cheeses. These combinations of food and drink—as well as others—are a sure way to lift the soul in dismal circumstances on the side of the road. Be sure to stock that fridge before heading out.

For our next breakdown, I plan on having red wine and steak. 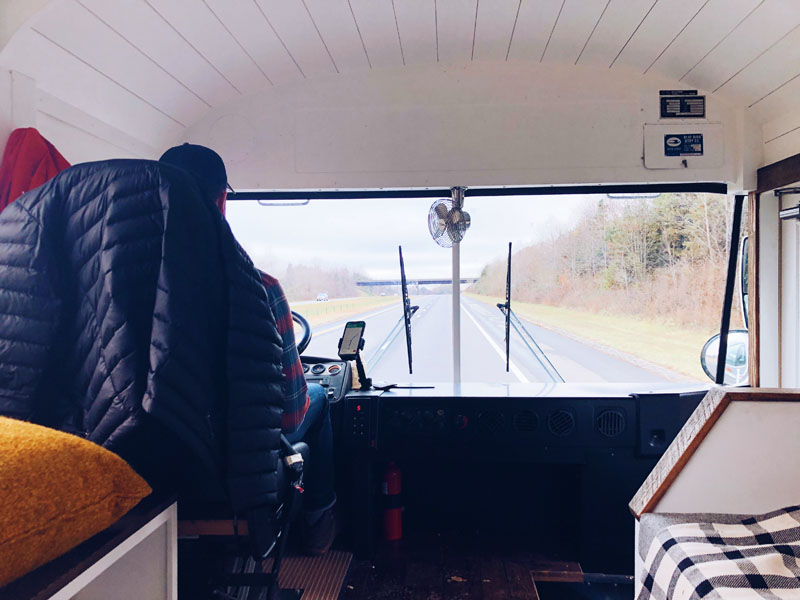 One major mistake we made in our build was not putting in a propane heater.

So, when we broke down in the winter in 25-degree weather on the side of the road for two nights, we weren’t prepared for how to deal with the cold off-grid. The first night we all climbed in bed together; my husband and I with the baby and even the dog! The baby and the dog thought it was awesome! I got every blanket, sleeping bag, and rug we owned to cover us and insulate the floor and doors. The second night we got a portable indoor propane heater to heat the place up and then we turned them off while we slept. I just wasn’t sure how safe they really were inside. Point being, if you are traveling in the winter, have an off-grid heat plan or be okay being cold.

I probably wouldn’t have been as worried about the cold but we had our baby with us so that seemed to complicate my worry. 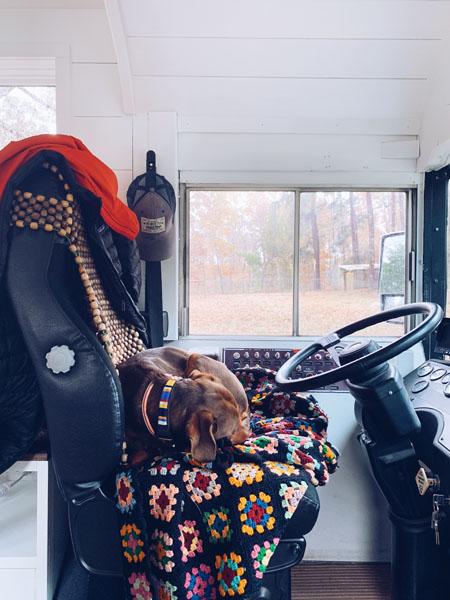 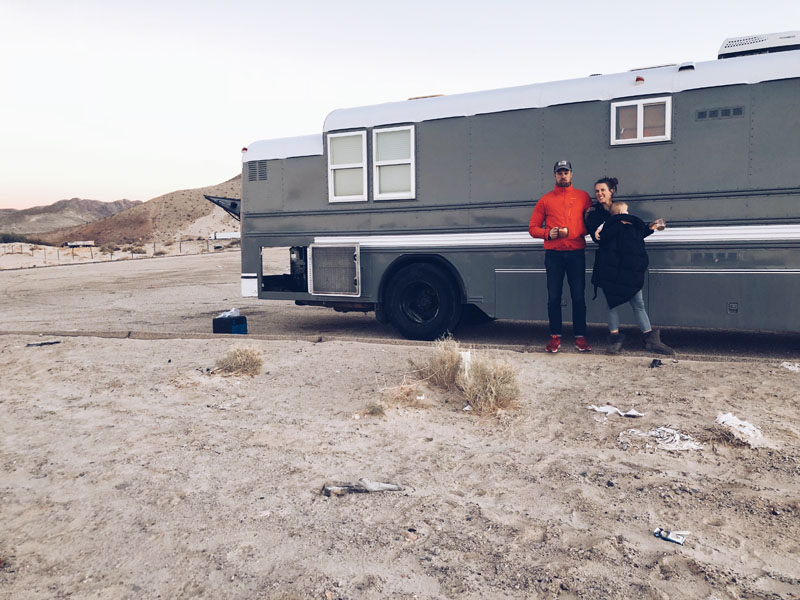 On the first breakdown we didn’t have any type of roadside assistance or insurance. That was a mistake for obvious reasons. Because we didn’t want to pay for a 50-mile tow, we tried to fix the bus on the side of the road. As soon as we got back on the road I called to get us roadside insurance from Good Sam in case we had any more trouble along the way. There are all different kinds of packages with Good Sam, but in light of the most recent breakdown, I got the Platinum Membership that included tires, roadside mechanic, 100-mile tow and lots of other perks. So, when we broke down a month later in Nevada in the middle of the desert close to sundown, Good Sam offered to either send a towing service or a roadside mechanic. Because we knew what the problem was and that the fuel lines really needed a shop to do an overhaul (again?!) and not just a roadside fix, we went with the tow. It was a 60-mile tow to the closest shop and I was so glad that we had the towing insurance! 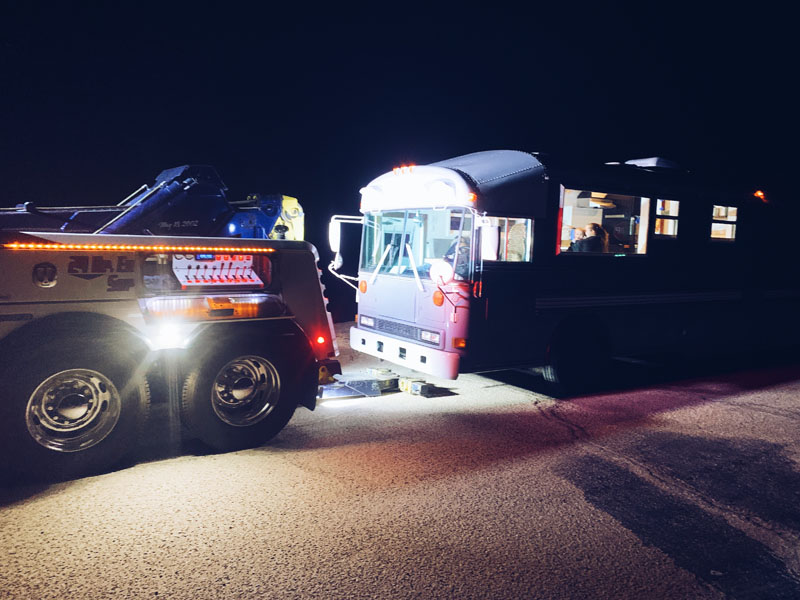 I can’t say this enough. You can prepare all you want but at the end of the day you will probably need some help out on the open road. During our first breakdown, where we were stranded on the side of the road, the nicest mechanic came out to help us at 10 pm at night and kept working on the engine with my husband until 3 am. It ended up that they needed a new part. The closest place where we could find the new fuel line was a three-hour drive away. We weren’t towing a car so we had to find transport to get the part. As luck would have it, where we were in Tennessee (TN) there weren’t any rental cars, taxis or Ubers. I couldn’t even get to another town to get a rental car without walking 50 miles. The nice mechanic from the night before said we could take his truck. I couldn’t believe that a stranger would let us drive their truck. We met so many other guardian angels out on the road—people that didn’t have to be nice to us—but were—and offered a lending hand. 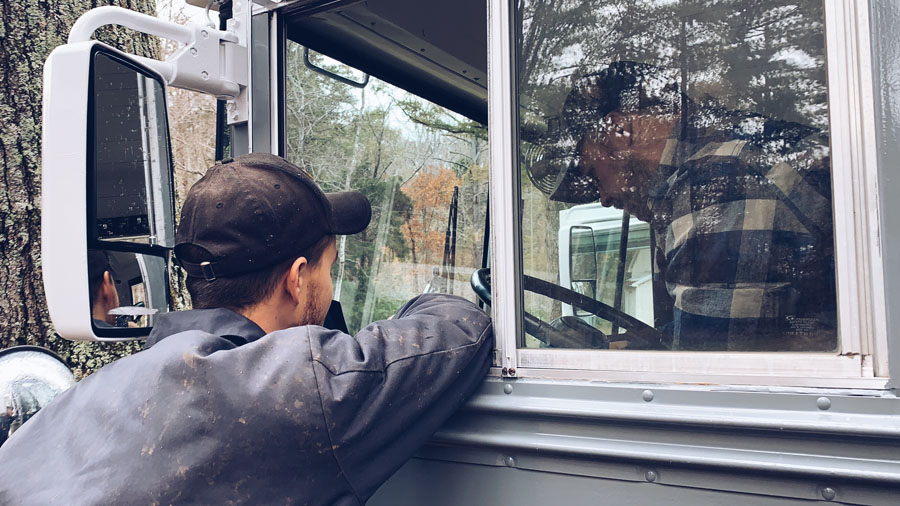 On the first breakdown we did have a full tank of water and on the second breakdown we didn’t, which was another reason we didn’t want to be stranded out on the road for a few days. The great thing about a bus is that if you do breakdown, you hopefully have most of what you need to wait for help or parts. There are things you can do without in a pinch, but water is really essential. 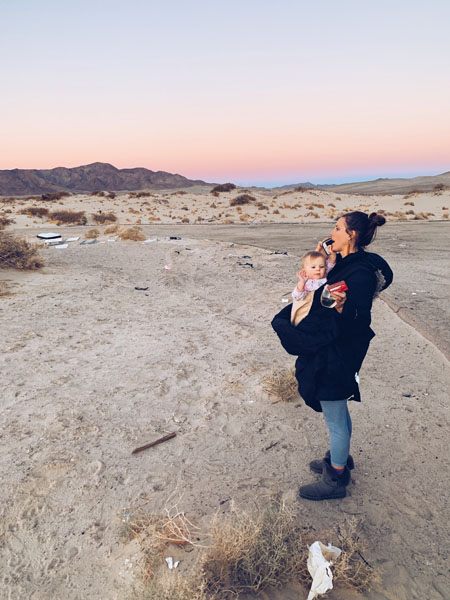 When your bus breaks down it is going to be hard to remember why you ever had this ridiculous idea in the first place—what a horrible idea to put your home in a bus that breaks down! But most of us probably didn’t pick bus life for more dependability and certainty. Most of us probably picked a bus conversion for more freedom and adventure. And breakdowns and mishaps are just part of the bus adventure. I know it is expensive, time-consuming, and uncomfortable, but you are going places and taking risks, and this is just what happens. 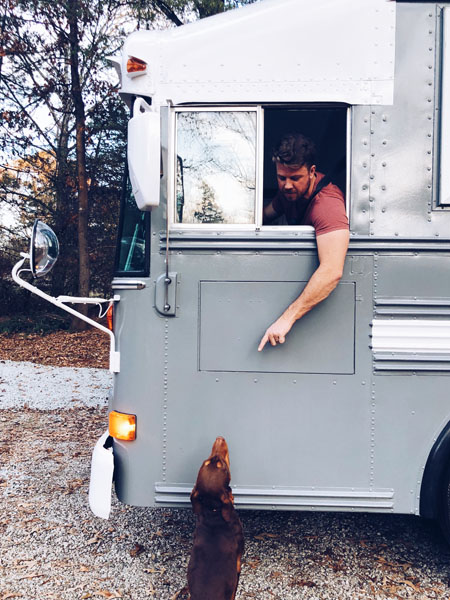 7. Build in a Wide Margin of Error:

We quickly learned to not make any plans on our cross country road trip. When we first set out I told my grandmother we would be there on Tuesday in Memphis, TN. Well, we got there five days later due to the breakdown. From then on, I would just call people the morning we would be arriving in their town and see if they were available, we could park outside their home and if they wanted they could have dinner with us in the bus. Breakdowns weren’t the only thing that slowed us down though: traveling with a baby made for more stops, sometimes we wanted the freedom to relax, weather got in the way, campgrounds being full changed our plans, and regular maintenance on the bus would eat into more time than we were expecting. Even if you don’t breakdown, there are other reasons that you might want to change your plans as you go. As a bus dweller/traveler, you don’t want a schedule to take away from all the freedom that the bus affords. 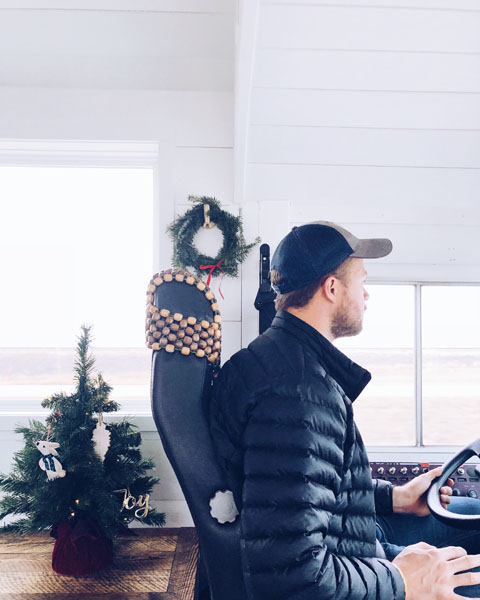 This might sound ridiculous to some people, but after our first breakdown we decided that if we could stop before dark we would. If you breakdown (hypothetically) or get a flat tire it is much easier to deal with it in the light of day than on the side of the road in the dark (and less dangerous). Obviously, it doesn’t always work out, but we don’t keep pushing on if there is a place to stop before sundown.

9. Have a Breakdown Budget:

This is kind of like an emergency fund but specifically for when the bus breaks down. Some people need more money in their breakdown budget—like us!—than others, who can fix stuff themselves, so you can figure out how much you want to set aside depending on if you can do your own repairs and how much you travel. If you can, always set aside more than you think you need, and then you will be surprised when there is extra. We didn’t have this breakdown budget in place for our first road trip, but you had better believe it is a part of this year’s budget, and we are setting aside money for the next mishap every month.

Have you broken down in your bus? What tips would you share?